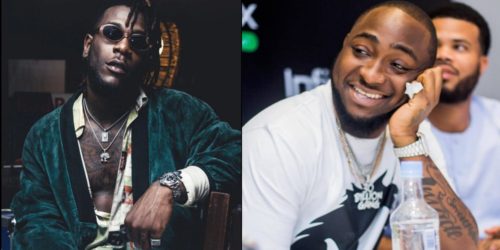 Grammy-nominated singer, Burna Boy has initiated another Twitter war with a message that has described as a diss to Davido’s “A Better Time” album.

Davido’s “A Better Time” album is scheduled to drop on the 13th of November, 2020, and fans and other artistes are super excited. Of course, there would definitely be naysayers and haters and Davido stans believe Burna Boy is the leader of this family of fans. How did we get here again you may ask?

Burna Boy took to Twitter to share a simple but cryptic and controversial message, “Floppy Disk“. This was interpreted as a shade because a picture of a Floppy Disk inscribed with the title of Davido’s album name “ABT” went viral.

Interestingly, this would not be the first time the singer was believed to have dissed him over the album. It would be recalled that Davido had also shared a picture of himself and Wizkid, calling them the greatest of all time. In reaction, the “Twice As Tall” singer had written what was perceived to be a shade at Davido via his social media page. He taunted him for using his father’s money to secure a place in the Nigerian music scene.“You cannot play football, everyone knows you are an embarrassment to the team, but your father bought the football team”

Davido had then announced that his album would be released in July which was the same time Burna Boy was initially meant to release his album and shortly after that, Burna boy responded again saying “July Will be very funny, I shall laugh accordingly” mocking Davido once again.

Oh well, when will this drama end? Do you think this is really necessary at all from Burna boy? Why diss an album that hasn’t even been relased yet?