15 Nigerian Songs About Police Brutality You Should Listen To #SarsMustEnd 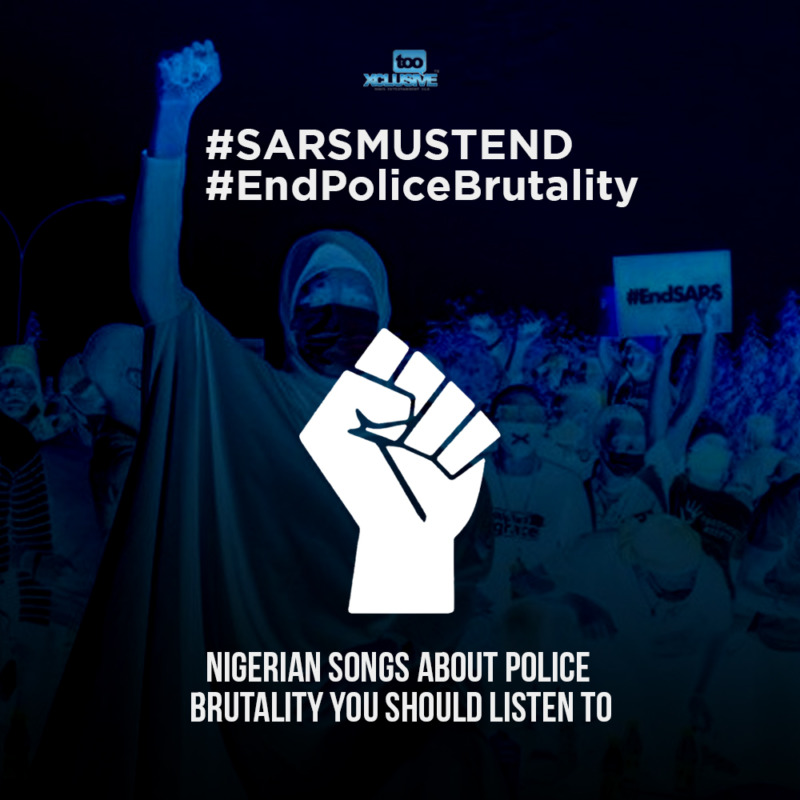 When Afrobeat meets politics/Issues the result is always eye opening and mind-blowing. For years many artistes have addressed the ills of the society ranging from police brutality to corruption, through their music.

(Nigerian Songs About Police Brutality) One of the main issues plaguing the country at the moment is the extrajudicial killings of youths by operatives of the Special Anti-Robbery Squad (SARS), a controversial and dreaded unit that refuses to let go of its reins in the society.

Nigerians are tired and everyone including international celebrities have protested against this menace. This week we have deviated from our regular playlist to bring forth one to get you going for the rest of the week as Nigeria continues to protest against police brutality. This playlist is a fusion of songs to keep you hyped, songs that address police brutality and the ills of the country

15 Nigerian Songs About Police Brutality You Should Listen To

Released off his 1977 Sorrow, Tears & Blood album, Fela was already a headache to the Nigerian Goverment because of the messages in his music. He fearlessly sang about how Nigerians have lost their loved ones and sources of income due to the brutality of the Nigerian police. According to Fela, the trademark of the soldiers and police is to leave sorrow, tears, blood

Released off Majek Fashek’s iconic album “Prisoner Of Conscience,” the track addresses police brutality, and decades later, it still sounds fresh to the ears. He expressed his anger and frustration at the heinous crimes committed by the people who are meant to protect and serve citizens in the country. He sang about how they, loot, kill, and shoot the leaders of tomorrow. “Them Dey Loot, Them Dey Shoot, Them Kill All Leaders Of Tomorrow. This Insanity Has Caused A Lot Of Disunity In Our Community. Oh What A Brutality/ I Call It Insanity.” With the new generation clamoring for change, this song remains iconic and would definitely push you to fight against this menace.

Popular music duo, Ajebo Hustlers came through with this track titled “Barawo” which is the Hausa word for “thief”. Produced by multi-talented music producer/singer, 1da Banton, and off their forthcoming EP “Timeless” the track seeks to end the jungle justice killing in Nigeria and Sub-Saharan Africa.

It was released in remembrance of victims of the famous Aluu 4 in 2012 and also educates that the insane barbaric act is a stark reminder of what will happen when the rule of law fails and the culture of impunity remains a norm. It also speaks about police brutality as its not just jungle justice that’s a major problem in the country. The corrupt politicians loot and in return the police meant to protect kill the masses instead.  The masses they para, Cos raba no dey, Every second, Na hour of rosy, Politicians dey loot us, Olopka dey shoot us, Aboby try put call, Say yawa mogbe, Aai e dey weigh me, Somtime say brother.”

Just before his untimely death, Dagrin released this timeless track where he rapped about the state of the country. The track is still very relevant to today’s socio-political landscape in Nigeria. He addressed the issue of police officers collecting bribes from the poor and how they go through extreme measures just to collect it .“Nigeria ni mo ti ri t’olopa ma n toro bara, Nitori twenty naira won le fi ba e faa ya!” This song was released at a time where bribing the police was on the rise. For every encounter /interaction with the police, there is a high chance that a citizen would be asked to a bribe each time.

Falz released this song as the second single off his 2019 4th studio album “Moral Instruction” which focused on the ills in the society. While the song samples Fela’s 1977 “Johnny Just Drop” which originally talks about Africans who travel abroad only to return home with new values and mannerisms, Falz spoke about the unfortunate situations surrounding the death of Nigerian youths by the police.

“What is the point of the gunshot pause,Johnny just drop, Ah Johnny just drop, For no just cause, Ah go ah, Johnny just drop
Na po po shoot am down, This motherfucking trigger happy nigga, Just cause unnecessary sorry for em family sha, All because dem no oblige you when you ask for some cash, No fucking dreads no weapons, Just him and his guys in his car, You have the guts to tell me you accidentally discharge, Mad man waka, You be bloody bastard ,You waste a life and try to tell me.”

Burna Boy – “Monsters You Made”

Burna might not be your favorite person at the moment but his track off the “Twice As Tall” album is a great song for empowering the youths to fight for a change. The Chris Martin-featuring “Monsters You Made,” sees Burna Boy tackle the issue of colonialism and the oppression of black people worldwide, its video sees the singer lead an army of youths to ambush a money truck convoy, collecting the millions of bills into a building-sized pile and setting it ablaze. Burna Boy comes with a strong message – don’t mess with us because we are the monsters you ( the government) made, we’re ready to fight for our rights.

Wande Coal “Se Na Like This” is a track that still disturbs the mind of the youths especially that are conversant with it at the time of its release. Wande sings about the Nigeria of before and how corruption has caused chaos. It embodies the current situation of the country, the hardship, and the injustices currently going on.We’re yet to get a response for this question or shey nah like this we go dey? How long would innocent people continue to get killed?

Following the recent killings in the country by the police, Rudeboy’s “Oga” addresses the terrible of the country. The politically conscious music seeks to wake Nigerians up to rise and protest for real change. Rudeboy stands for never-ending police brutality by SARS, violence experienced during elections and corrupt leadership. He also talked about how the leaders have been recycling themselves for decades, using hunger to enslave the citizens and deceiving everyone with sweet talks/promises.

Falz – “This Is Nigeria”

A brilliant masterpiece from Falz which addresses the country’s worst problems one reference at a time. The track is his take on Childish Gambino’s groundbreaking “This is America” video. According to Falz, the song “addresses numerous political and social ills”, and is an attempt “to spark a reaction in the positive direction”. The captivating visuals highlights played out the everyday struggles of Nigerians from political corruption, police brutality/violence, to extreme religious practice, and terrorism.

Ruggedman – “Is Police Your Friend?”

This track is simple and self explanatory and asks the question no one really has an answer to “Is The Police Really Your Friend?”The superconscious track talks about the actions of some Nigerian police officers on too many youths of today that he sees as wrong. He lends his bars to the protest against police violence and gross abuse of human rights as captured by the recent social media campaign under the hash-tag #EndSars. He rapped about the high-handedness, intimidation, unwarranted arrests, and allegations of murder by the SARS operatives. 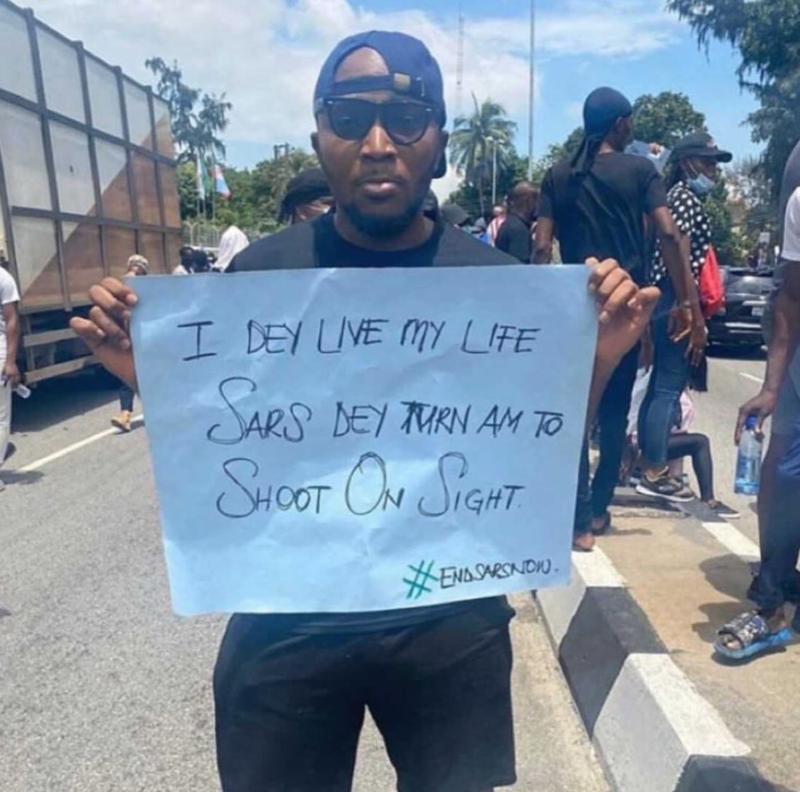 The troubles of enforcement agency SARS in 2019 led Zlatan to take advantage of the situation to deliver the tune“#EndSars”.This was released at the time Kolade Johnson was killed after watching a football match between Liverpool and Tottenham Hotspur. Zlatan in the track called for the controversial unit be completely scrapped.

On “Thieves in Unform” which is used to describe the men of the police force as thieves sees Dremo lend his voice to the ongoing protests in the country.

Above Are The 15 Nigerian Songs About Police Brutality Y’all Need To Get Familiar With As We Continue the #SarsMustEnd Peaceful Protest.